Regenerative energy, decentralized energy supply - the energy change is on everyone's lips and drives people around the world. This also Cities, Communities and institutions in Germany and throughout Europe. After one and a half years of preparation was the 24. Januar im Institute für Advanced Sustainibility Studies (IASS) in Potsdam der Self-Sustaining Communities European e.V. founded. Following the launch event, the young club presented at the International Green Week in Berlin exhibition halls. 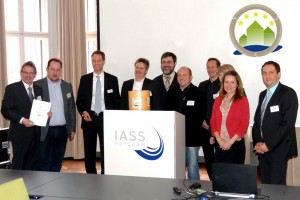 The Idea, a platform for professional exchange of different actors around decentralized, to create renewable energy supply, has a longer history: Already in the 2000s, communities have regenerative in Germany and Austria as pioneers in the field, operated decentralized energy supply. Thus, various pilot projects were carried out and founded the first bioenergy villages: Jühnde in Germany is also. Then it went quickly: In 2010 the Federal Ministry of Food, Agriculture and Consumer Protection (BMELV) conducted a bioenergy village Competition. Winners were the municipalities Feldheim, Jühnde-Barlissen and Effelter. They are characterized by particularly innovative projects and large civic engagement. Also, the 2009 eröffnete Institute for Advanced Sustainibility Studies (IASS) and Potsdam, das von Prof.. Dr. Dr. Klaus Töpfer is passed, interested from the beginning for this topic. At a joint event at the IASS, which took place at the invitation of Mr. Potter, gave the community Feldheim the decisive impetus, to establish a network. Patron of the network is Ilse Aigner, Federal Minister for Food, Agriculture and Consumer Protection (BMELV).

After five preparatory meetings and a half years in development, the European network was founded as a non-profit organization. The Parliamentary State Secretary to the Federal Minister of Food, Agriculture and Consumer Protection, Peter Blessing, in his speech welcomed the initiative and emphasized the crucial energy challenge. "The energy turnaround will only succeed with us, when people help carry the necessary policy and investment measures on site. Projects for decentralized renewable energy supply help, build this trust, because people can see the direct impact and benefits on the ground. "Many bioenergy villages and regions, as the Parliamentary Secretary further, were already promising examples of involvement and participation of the population in the future energy supply in the regions.

The founding members of the excellent bioenergy villages Jühnde, Feldheim, Effelter, Großbardorf and the Association of Energy Vision Franconian Forest eV. want with this step towards a federal- or. Europe-wide spread of the idea itself with energy supplying towns further take a big step. ” The aim of our network is, to promote the exchange of experiences decentralized energies”, so der 1. Chairman, Eckhard Fangmeier. “A major breakthrough in the field of energy policy will only succeed, if we can win this idea for the local people and really take on the way to the age of renewable energy supply” so der 2. Chairman, Wolfgang Degelmann further. “For a prescribed turn without the actors, people, will not last”, so Degelmann more.

We like to share our experience gained to all interested parties. No matter, whether they aspire to a similar project as villagers or initiative or whether they are interested in a planner for the technical intricacies. Learn more ...

This is a machine translation function, so that errors can creep in here and there!